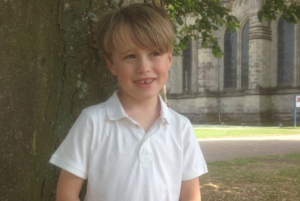 If you follow us on social media, you may have heard us talking about something called ‘George’s Journey’. George’s Journey seems to have taken over at KMA HQ, but for all the right reasons. The event was a 24-hour sponsored spin which took place midday on Monday 22ndJuly and ended midday on Tuesday 23rdJuly 2019 at John Hanson Community School in Andover.

We wanted to take the time to explain what happened during these 24 hours and what it has started -it seems that although the event itself has ended; it really is just the beginning.

Have you read about what KMA have been up to?

The incentive behind Georges journey is all about giving a 6-year-old boy with Juvenile Macular Dystrophy the chance to see as much of the world as he can before he inevitably loses his sight. George is 6 years old and in March 2019 he was diagnosed with a rare genetic eye condition called Juvenile Macular Degeneration, the condition progresses rapidly and sadly there is no known cure. Since his diagnosis. George now struggles to read, watch TV and to recognise faces, he is now registered as sight impaired and has lost his colour vision completely.

For more information on Macular Dystrophy check out The Macular Society .

Despite this, George is full of energy, creative, loud, funny and very curious – everything you’d expect from your typical 6-year-old child. George created his very own ‘visual bucket list’ with 3 famous landmarks making the top spots: – 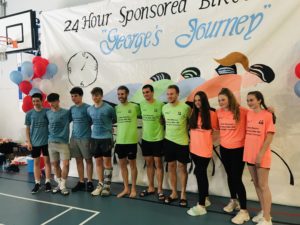 John Hanson School in Andover heard about George through his primary school. The head boy of John Hanson – Josh, decided to not only organise an event to raise money for George but also to take part in it.

Josh contacted us at KMA to ask for sponsorship after he completed his work experience with us.

Our role predominantly consisted of providing marketing, PR and support services. Emily, who is our Digital Marketer, offered her time to help promote the event on our social media platform and also to contact local businesses to ask for their support. Sarah our Referrals Co-ordinator was not only kind enough to donate her time, but she was a real driving force in the visual and creative aspects. Kate our Founder and Managing Director was a fantastic support for the entire team. Kate was present for the entire 24 hours and spent a lot of time ensuring everyone had enough food to eat, they were all drinking enough water and were using their hours off to cool down and stretch properly. 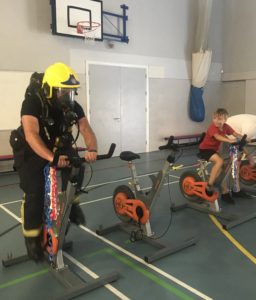 The event itself was amazing. We couldn’t describe the atmosphere; the community spirit just filled the air. Everyone pulled together and we even had a steady flow of guests throughout the night, even at 2 and 3am. The cyclists were recognisably in pain and began flagging around 9pm, however, their sheer determination and persistence never once stopped. Kate explained that during the night slots, they slept for 2 hours and then cycled for 1 hour. Speaking about their enthusiasm brought tears to her eyes. ‘Not only were they so determined to do this, but not one person complained’.

We had some amazing guests

George and his family were at John Hanson for most of the day. George’s parents helped set up the hall with the KMA team and George made many appearances to greet the guests and pedal along with the cyclists. The family were very clearly overwhelmed with what was going on but so appreciated the kindness of everyone. Throughout the event we were visited by some really amazing guests, including the Macular Society, Andover Rugby Club, Hampshire Fire and Rescue, Andover Constabulary, Vision Express as well as all the fantastic family, friends, students and supporters who also attended.

Towards the end of the spin, the atmosphere was electric. It was the end of term for the students which meant the hall was full of pupils cheering the cyclists on in their final push. The head boy, head girl and their head of year were the last ones to pedal as the entire hall counted down 10, 9, 8, 7 ,6, 5, 4, 3, 2, 1… and just like that, the 24 hours had been completed. Watch the last few seconds of Georges Journey here.

To finish the event there was a small presentation where the cyclists were presented with medals. What they had achieved and completed was and is something to be so proud of and it certainly hadn’t been easy! The Head Master of John Hanson School, Mr Stevens, gave a speech. It began with “Teenagers often get a bad reputation for being selfish and lazy, however, what these young adults have achieved completely dismisses that statement and these students have set the bar extremely high as a level of example for others to follow.”

The RAF have been inspired

Since this amazing charity event took place, we have received some exciting news;

The RAF at the Brize Norton base have been inspired so much by the students and staff at John Hanson School that they will conduct their very own sponsored spin on the 28thand 29thof August 2019 and all of the funds raised will go into the George’s Journey Go Fund Me page. We are hoping to get the original team of cyclists, students and parents up to Brize Norton to watch the RAF. We are so incredibly proud to hear this news and we are really excited to show our support to the RAF.

We were so honoured to be part of such a fantastic charity initiative, and we will continue to share our progress and updates of George’s Journey.