3 in 100 Adults Screened Positive for PTSD in the UK. 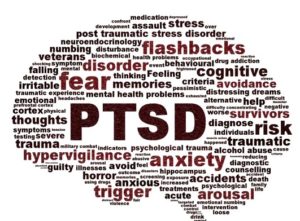 One large survey of the general population in England found that 3 in 100 adults screened positive for PTSD. Post-traumatic Stress Disorder is often misdiagnosed as the symptoms can be similar to other mental illnesses.

It is suggested that around 70% of people who suffer with PTSD in the UK do not receive any professional help at all, and many of those who are aware they have it are not getting the help and support they need.

If you are given a diagnosis of PTSD, you might be told that you have mild, moderate or severe PTSD. This explains what sort of impact your symptoms are having on you currently – it’s not a description of how frightening or upsetting your experiences might have been.

There are various forms of PTSD, the most common include:

There is a widespread misunderstanding that PTSD only affect veterans, or those in the armed forces (likely due to its previous name of shell-shock) but it can in fact affect anyone, of any age. It’s imperative that people are aware if they (or a friend or family member) have experienced a traumatic event, they should be mindful of trauma symptoms, and the possibility of PTSD. It’s also possible to experience PTSD from watching an event on the television.

The disorder is characterized by three main types of symptoms:

There are a variety of therapies and activities that can help reduce and overcome PTSD symptoms, some are immediate, and others longer term, but the current NICE guidelines recommend EMDR and CBT as the main options for the treatment of PTSD.

Occupational therapy is also successful in treating and overcoming PTSD. Have a read of our case study to find out more information on this.